Atomic Minerals 10 Mile claims cover the eastern and western flanks and southern nose of the Ten Mile Anticline, in a geological setting Atomic’s management team believes is identical to the Lisbon Valley Anticline. Lisbon Valley encompasses the Big Indian mining district, which produced 77.9 million pounds of uranium oxide and 19 million pounds of vanadium from 16 large mines between 1952 and 1988 from the Triassic Chinle and Permian Cutler Formations from relatively shallow depths to in excess of 2,550 feet. This production represents more than 80 percent of the uranium ore mined in Utah during this time period. Ore grades averaged 0.34 percent U3O8, making it the highest grade of all the large uranium mining districts discovered in the United States. Source Chenoweth, W.L. (1990).  Lisbon Valley, Utah's Premier Uranium Area, a Summary of Exploration and Ore Production.  Utah Geological Survey Open File Report 188, July 1990.

Supporting the uranium potential of the 10 Mile property is the 7 Mile district, located 8 miles to the southeast. Seven Mile is located on the northwestern flank of northern nose of the Moab anticline and produced over 1,700,000 pounds of U3O8 and 890,000 pounds of vanadium from thicknesses ranging from 1 foot and 8 feet at an average grade of 0.26% U3O8 from the basal Moss Back Member of the Chinle Formation. Source: Seven Mile Canyon Mining District, Grand County, Utah, USA. https://www.mindat.org/loc-203792.html. This description referenced Droullard, R.F., and Jones, E.E. (1955) Geology of the Seven Mile Canyon uranium deposits. U.S. Atomic Energy Commission Rare Metals Evaluation RME-4066, 14 pages.

Further supporting the uranium potential of 10 Mile are a series of historic oil and gas drill holes throughout the area. This drilling indicates the depth to the Moss Back is 1,400 feet on the southwestern flank and 2,390 to 2,500 on the northeast flank. Gamma Ray logs from several of these holes show spikes, indicative of uranium mineralization, within the basal section of the Chinle Formation.  The basal Chinle beds are the primary location for uranium mineralization in the Formation throughout the area. 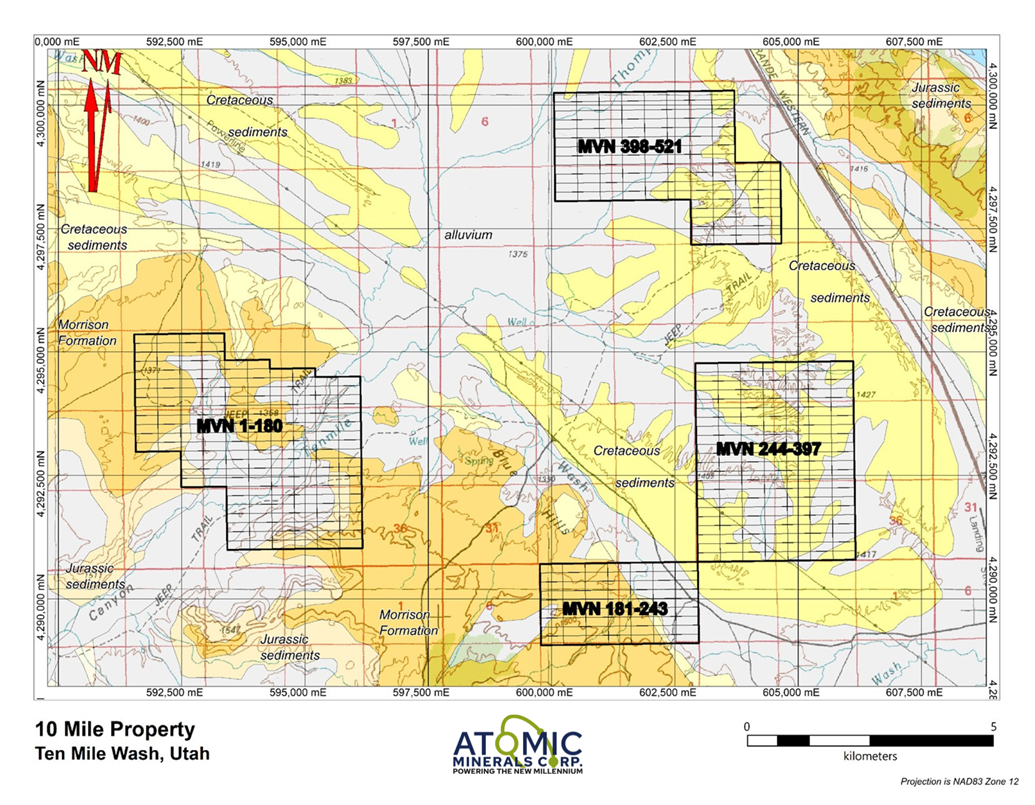 The 10 Mile claim blocks was staked based on the geological similarity to the prolific Big Indian District, the presence of significant uranium in the 7 Mile District of the Moab Anticline and the historic oil and gas gamma ray log anomalies at the 10 Mile Anticline.

Atomic Minerals is a Vancouver based publicly listed uranium exploration company trading on the TSX Venture Exchange, with current assets in Saskatchewan’s Athabasca Basin and the Four Corners region of the southwest United States. The Company is led by a highly skilled management and technical team with numerous previous successes in the junior mining sector.

For additional information, please visit the Company's website at www.atomicminerals.ca

Mr. R. Tim Henneberry, P.Geo. (BC), is the "Qualified Person" under National Instrument 43-101 Standards of Disclosure for Mineral Projects ("NI 43-101") and is responsible for the technical contents of this news release and has approved the disclosure of the technical information contained herein.

ON BEHALF OF THE BOARD OF DIRECTORS

Back to Past News