Atomic Minerals Harts Point Project lies on the eastern flank of the southern extension of Gibson Dome, a non-diapiric salt anticline, in San Juan County, Utah near the northeastern limits of the White Canyon Mining District. Four mines located about seven miles west of the Harts Point Project, the Jean, Moki, Lavender, and Conglomerate, in upper Indian Creek shipped a total of 42,000 tons of material hosted by Chinle Formation sandstones during the 1950's uranium boom. Average uranium grades were 0.30% U308 and vanadium values were also present.* 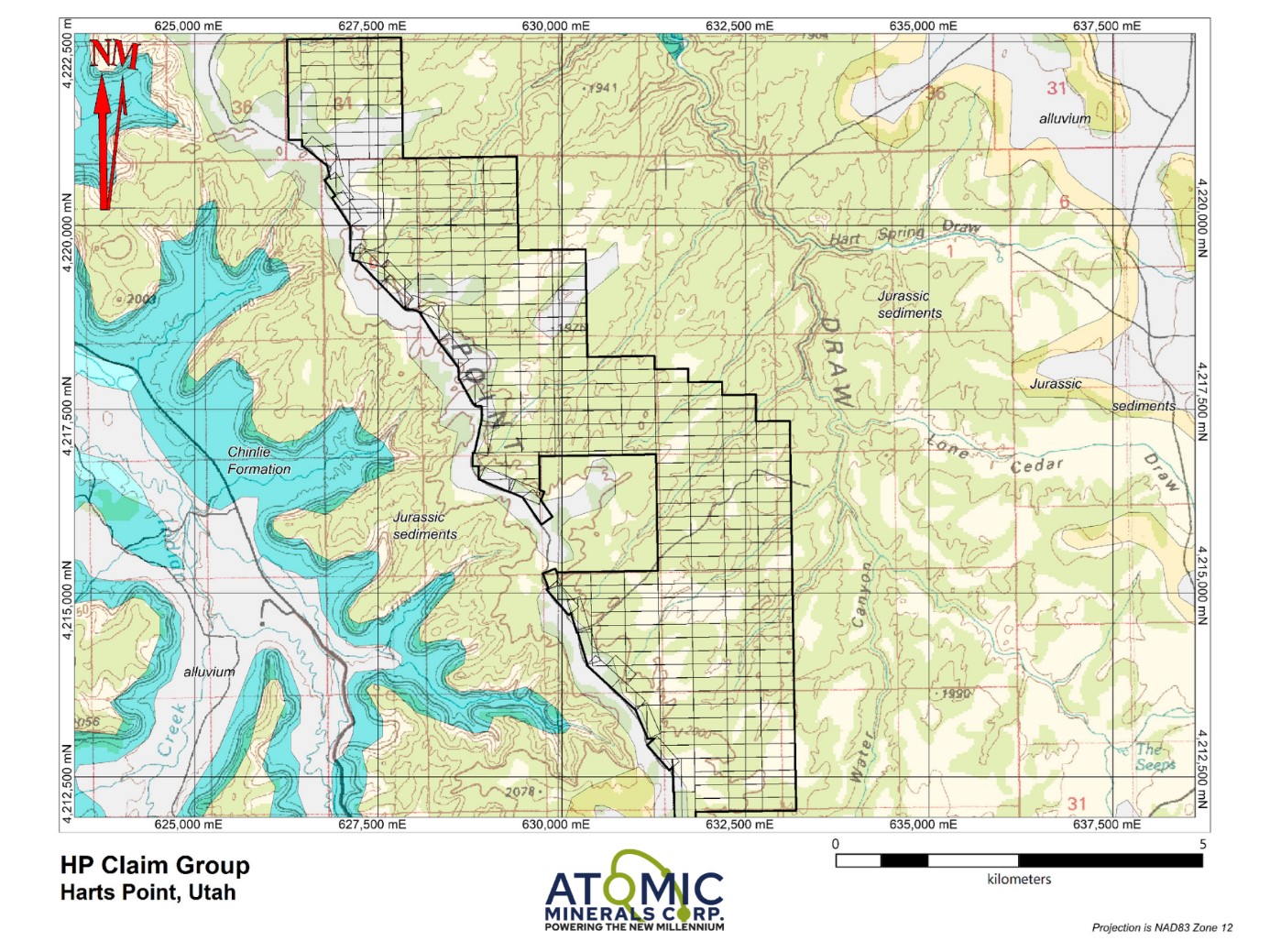 The July 6, 1952 discovery of the Mi Vida mine by prospector-geologist Charles A. Steen of 14 feet of high-grade uraninite at a depth of 70 feet ignited the 1950s Uranium Boom. Once news of Steen’s discovery was confirmed by production later that year, an extensive claim staking rush that saw more than 300,000 mining claims staked in San Juan County and Grand County, Utah resulted. The Mi Vida mine contained more than 1,500,000 tons of ore averaging 0.37 percent uranium oxide and 1.40 percent vanadium pentoxide. This was the first uranium ore deposit discovered on the Colorado Plateau that contained more than 1,000,000 tons of uranium ore.*

Atomic Minerals’ mining claims were located on the Hart’s Point anticline to cover the crest of anticlinal structure where the thickest Moss Back Member should be found in a similar geologic setting to the Mi Vida mine. There is no evidence in the field of any uranium exploration drill holes on the Hart’s Point anticline. The lack of Morrison Formation on these claims and the depth to the Chinle Formation probably accounts for the fact this structure has never been explored.

Historic oil and gas drilling throughout the Colorado Plateau included three holes in the immediate area of the Harts Point Project; two are 1600 feet apart and the third is 2.8 miles to the northwest. These three holes located the prospective Chinle Formation between 1,200 feet to 1,400 feet below surface.  Gamma ray logs from each of the three holes showed spikes within the Moss Back Member which forms the basal section of the Chinle and is the primary location for uranium mineralization in this formation throughout the area.

The lack of uranium, represented by gamma ray anomalies, in the upper sections of the Chinlie Formation at Harts Point is very similar to the geologic conditions found in thousands of uranium exploration holes drilled in the Big Indian mining district between 1952 and 1988. The considerable thickness of the overlying non-mineralization Moss Back Member above the mineralized portion is also considered to be analogous to the Big Indian mining district, because it is the probable source of the uranium found in those ore bodies. The Harts Point Project claim block was staked based on a review of the Harts Point historic oil and gas gamma ray logs and the suspected anticlinal structures similar to Lisbon Valley.