Clive Massey Atomic Minerals CEO and President commented “We are pleased with the results from the 2022 airborne survey over Lloyd Lake. Integration of this magnetic data with the historic data sets has assisted in defining drill targets within the conductors for an initial drilling program.”

KBM flew a total of 798 fixed wing line km of high-resolution airborne magnetics at 100 m line spacings over the Lloyd Lake Project. A distinct, consistent northeast-southwest trending magnetic high that becomes more fragmented to the southwest was highlighted on the eastern side of the claim block and appears to be surrounded on the eastern, western, and southern edges by a consistent magnetic low, suggesting a possible southwest plunging fold. See Figure 1. 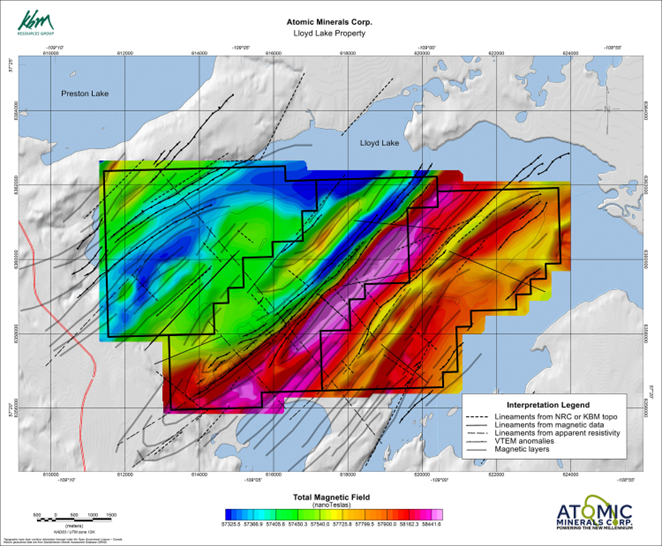 About the Lloyd Lake Project

The Lloyd Lake Project lies immediately south of the western Athabasca basin approximately 90 km SE of Fission Uranium's Patterson Lake project. Lloyd Lake was extensively explored by Western Athabasca Syndicate in 2013 as part of the Preston property, generating a significant dataset, which includes: airborne EM-magnetic and radiometric surveys, follow-up prospecting, systematic lake-bottom sediment sampling and lake-bottom water sampling for radon gas analysis, and broad soil, biogeochemical and radon-in-soil surveys, generally at 100 m to 200 m sample spacing and 200 m to 400 m line spacing. Radon gas is a decay product of uranium with anomalous concentrations indicative of potential uranium occurrences. Subsequent exploration concentrated on anomalous areas identified by the earlier surveys, and included phases of mapping and prospecting, a versatile time-domain electromagnetic (VTEM plus) and aeromagnetic survey and an airborne radiometric-VLF-EM and magnetic survey. Atomics’ technical team is in the process of compiling and reviewing the various datasets to generate targets for upcoming exploration.

Atomic Minerals is a Vancouver based publicly listed uranium exploration company trading on the TSX Venture Exchange. The Company is led by a highly skilled management and technical team with numerous previous successes in the junior mining sector.

For additional information, please visit the Company's website at www.atomicminerals.ca

Mr. R. Tim Henneberry, P.Geo. (BC), is the "Qualified Person" under National Instrument 43-101 Standards of Disclosure for Mineral Projects ("NI 43-101") and is responsible for the technical contents of this news release and has approved the disclosure of the technical information contained herein.

ON BEHALF OF THE BOARD OF DIRECTORS
“Clive Massey”
Clive H. Massey
President & CEO